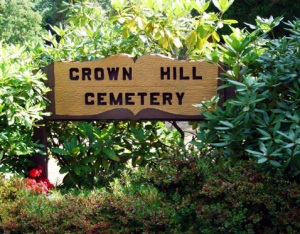 It takes a little bit of effort to find Crown Hill Cemetery near Seattle’s Ballard neighborhood. Surrounded by hedgerows and with a sign half-swallowed by rhododendrons, the low profile is so effective, some local residents don’t even realize it’s there. And that’s how the old Scandinavians probably would have liked it.

“Ballard was a mill town in Seattle. It was made up of sawmills and ship chandleries and machine shops and fishing docks and dry docks. It was a place of working men, hardworking people, union men with big calloused hands, some of whom died young because they worked too hard. Ballard was not pretty…just a district of honest immigrant Swedes, Norwegians and Finns who sought to make their lives better, who sought dignity and decency without flair or fanfare.” *

Pine, cedar, and fir trees are scattered throughout the site, offering both shade and a reminder of the area’s logging roots. Another surprising aspect is the amount of seemingly open, park-like space in the oldest sections. The unexpected, in-ground headstones can claim this credit. Discreetly receding into the lined distance, the markers are simply inscribed with such old-fashioned names like Hedwig, Torbjorg, Inga, and Lars.

The in-ground setting can make finding a particular headstone challenging. One woman asked the caretaker for help after an unsuccessful hunt for her family marker. Perhaps the stone had been stolen? However, after one last careful search, the caretaker managed to locate the marker discreetly covered with grass clippings.

In 1885, there were at least a few hundred Swedes living in Seattle. By 1920, every 20th inhabitant of Seattle was Norwegian-born or the offspring of Norwegian parents. In Seattle, one could shop, work, worship, and socialize in the Norwegian language. Ballard became a Norwegian community where one could meet or perhaps marry a neighbor from home – or at least talk to someone who spoke the same dialect.**

Ballard became the integral focus, a home to mill workers, fishermen and boat builders . Prosperity came from the numerous lumber and shingle mills along the city’s industrial waterfront and by 1905, more red cedar shingles were being produced in the ten shingle mills here than in any other community nationwide.***

Even more impressive was the blasé approach to the frequent sawmill accidents. When researching his book, More Deadly Than War: Pacific Coast Logging 1827 – 1981, Andrew Mason Prouty came across the following excerpt from The West Coast Lumberman:

“Ballard will soon have to open a graveyard for fingers. A total of 13 were sawn off at the shingle mills recently…”

Sawmills were dangerous places. The pounding of the machinery and the shrill whine of the saws were hypnotic. Edgers and planers could trim a board almost faster than the eye could follow. As a result, reflexes lost their timing and when that happened, the saws butchered the shingle weavers’ hands.

The overall perspective on sawmill work wasn’t much better.

“All machinery was dangerous, lumber machinery particularly so. Workmen engaged in hazardous trades should not have been surprised when saws cut them or emery wheels exploded in their faces. In a sense one might say that mechanics and journeymen were ‘guilty’ because they deliberately worked around machines and machines as such could not be trusted.” ****