Following up from Wednesday’s funerary marker from Qaryat al-Faw, this watchful eye stele hails from the ancient trading city of Tayma. Inscribed in Aramaic, the stone’s inscription reads, “In memory of Taym, the son of Zayd.”

Tayma is located in the NW corner of the Arabian Peninsula and dates to the 3rd millennium BCE. Located near a plentiful water supply and the incense trade route, Tayma was a well-known and prosperous trading city for thousands of years. 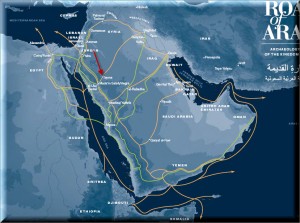 Steles of this type were also common in the southern part of the Arabian peninsula, suggesting regular contact between these two trading areas.